This raffle is licensed by:
West Lindsey District Council

Society registration number:
Our church is exempt from registering as a charity by the charity commission under the The Church Representation Rules(within schedule 3 of the Synodical Gov.t Measure 1969 as amended) and The Parochial Church Councils (Powers)Measure 1956 as amended

On Friday 4th Sept, a guided tour of RAF Scampton Heritage Centre including a meet and greet with with Wing Commander Parker (OIC RAF Scampton) - (operational commitments permitting) - A tour of 617 Squadron Dambusters Hanger, & Guy Gibson's office, a photo shoot in a Red Arrows Hawk Jet. Have lunch in the Sergeants and Warrant Officers mess with its rich history, fine paintings and memorabillia.

An overnight stay at The Premier Inn Lincoln including breakfast.

On the Saturday 5th Sept, a full VIP escorted day at The Newark Air Museum one of the UK's largest volunteer managed collections. You will be welcomed at the museum with a coffee, followed by a guided tour. After a light lunch you will be free to explore the collections of around 90 aircraft and cockpit sections. An internal tour of the cockpit of Vulcan XM594 is included (subject to volunteer availability).

Followed by an evening meal with wine at The Dambusters Inn and Heritage Centre, Scampton.

Another overnight stay with breakfast at The Premier Inn Lincoln.

On Sunday 6th Sept, a VIP escorted tour, with lunch included, of the International Bomber Command Centre on Wings and Wheels Day.

(The value of the three day weekend is 'unique'!)

A fantastic full day's aircrew experience for two people at The Tornado Heritage Centre, worth £300 including a session in the F3 simulator with ex RAF Tornado instructors. Included is an overnight stay at The Premier Inn Chester. (Package Value £370.)

Learn to fly a Spitfire in the Boultbee Flight Academy Spitfire Simulator Experience. Fly the world's only professional MkIX Spitfire simulator!
Based on a genuine WW2 Spitfire.
Learn the basics of flying this iconic plane.
Looks, feels and even sounds like a real Spitfire.

Included is an overnight stay with breakfast at The 4 Star Goodwood Hotel and Spa. (Package value £300.)

A family ticket (2 adults and 3 children) for a day at: The Imperial War Museum, RAF Duxford. 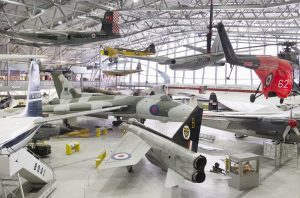 A beautifully framed (red, white and blue) photo of the Red Arrows over The Mall and Buckingham Palace, originally signed by the pilots 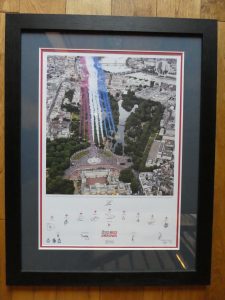 A guided tour of the Lancaster bomber NX611 'Just Jayne' at: The Lincolnshire Aviation Heritage Centre 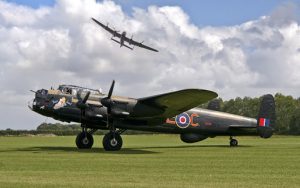 Afternoon tea for two at The Petwood Hotel Woodhall Spa. The Petwood was the base for the officers of 617 Squadron during WW2. The Squadron Bar hosts a range of memorabilia and tributes to Wing Commander Guy Gibson VC, Group Captain Leonard Cheshire VC and their Officers.

A framed originally signed photo of the Battle of Britain Memorial Flight Lancaster PA474 signed by all crew and staff at BBMF. 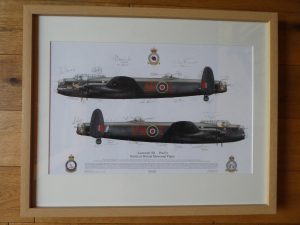 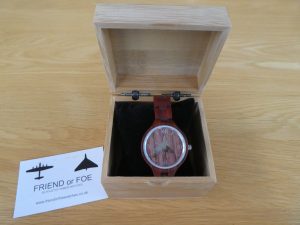 A lecture supper at: The International Bomber Command Centre Lincoln

A framed photo of the last Vulcan (XH558) to fly originally signed by the last flight crew. Presented by Vulcan to the Sky Trust. 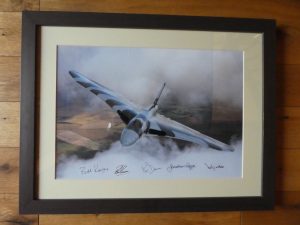 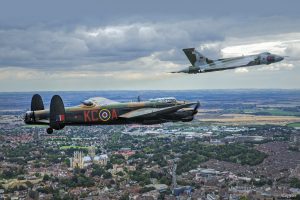 A limited edition print of a painting by renowned aviation artist Mal Grosse (‘Cleared for take off’) of Vulcan XH558 ‘The Spirit of Great Britain’ on her first take off following restoration. The £7 million restoration has been described as ‘the most complex return to flight project ever attempted in the world. This limited print is originally signed by the artist, pilot , co-pilot and air electronics officer on that maiden flight 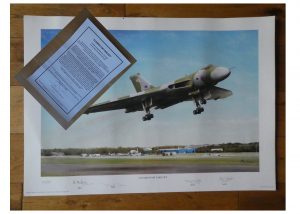 A framed 3D picture of the Supermarine Spitfire IX MH434 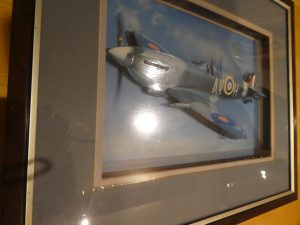 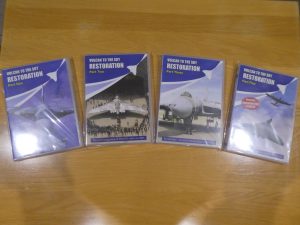 Three chances to win a 595 x 475 limited edition print of RAAF Lancaster B1, over Spurn Point, returning to RAF Binbrook in June 1944 with both starboard engines failed. Personally signed by the artist Edward Ash. 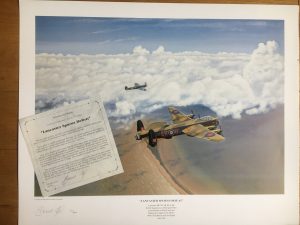 Five chances to win a  545 x 445 print entitled 'After me the flood' by Michael Stuart - Wing Commander Guy Gibson DSO DFC commanding officer 617 squadron with his pet labrador dog at RAF Scampton before the specialised attack on Germany's Ruhr Dams. 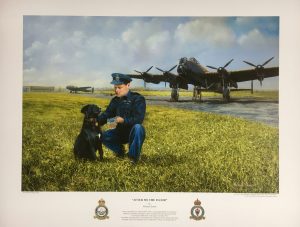 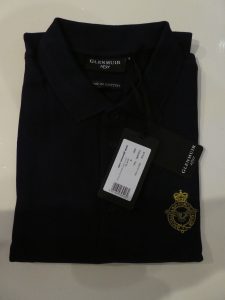 A Pilot Teddy from The Royal Air Force Club in Piccadilly, London. 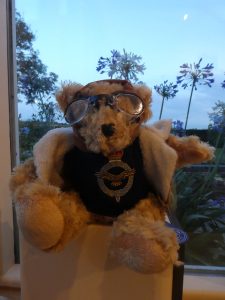 Fifty chances to win a Red Arrows programme including full details of all pilots, team staff and manoeuvers. 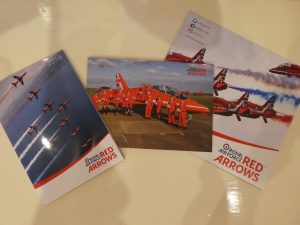 With thanks to Greg and Steve at The Dambusters Inn Heritage Centre for hosting the raffle draw on Friday 14th August 2020 .

Specific terms and conditions attached to the prize(s) are:
All prizes are subject to the companies being in business on the date the prize is claimed

Minimum age of entry:
Individuals must be 16 years or older to purchase a ticket

The maximum number of tickets Individuals are able to buy for this raffle is:
£100 worth

Winners will be contacted within the following number of days:
With 7 days of the draw on 14th August 2020